Relic Hunters, like any setting, came in part from everything I was watching, reading, or taking in at the time.  I've tried to identify some of the major influences here. 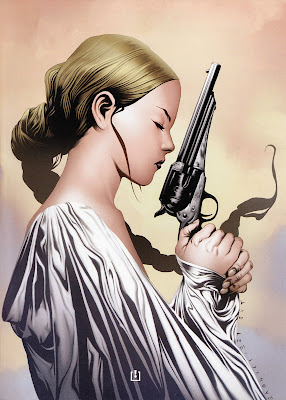 Gaming
The original Relic Hunters was run under the d20 system, letting me rob any number of settings.  Warforged were from Eberron

, of course, which was a big influence in and of itself.  Beastmen started out as Shifters from the same setting but evolved (or devolved as may be) into their own race.  Some of the concepts behind how magic works were inspired by Mongoose's Chaos Magic.  The Iron Kingdoms setting wasn't immune to theft, either.

If Savage Worlds isn't your style, any pulp game would be a natural match for the setting: it could be done in Adventure! or Spirit of the Century with just a few changes.  We even ran a few sessions using Wushu to see how the game worked.

Movies and TV
The Indiana Jones films, of course, along with National Treasure—the treasure hunt with puzzles was at the core of the game.  The French animation Mysterious Cities of Gold

, with its explorers and high-tech South American tribes, contributed quite a bit as well.  When it actually came time to run the game, I wound up taking some slightly less serious inspiration from the anime Lupin III

.  The city of Narreth on the edge of the desert is equal parts Deadwood and Cairo, with maybe a dash of Mos Eisley. 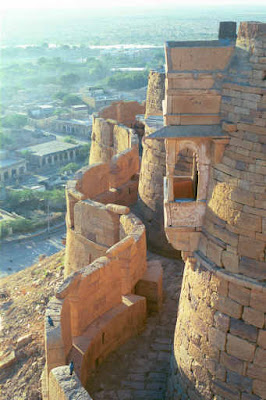 Books and Comics
Stephen King's Dark Tower series for mixing fantasy and westerns, as well as a world that had moved on.  Stephen Donaldson's Second Chronicles of Thomas Covenant

, for a land devastated by a magical catastrophe.  Jack Vance's Dying Earth

, less for the setting and more for the picaresque nature of Cugel's adventures.  The Rod of Judgement (and the effects when broken) owe something to Stephen Brust's Dragaera novels, particularly the Khaavren romances.  You might also look to Jules Verne or H. Rider Haggard.

Video Games
The Final Fantasy series, for airships, magitek, and an all-around willingness to cheerfully bring a sword to a gunfight.  Tomb Raider, for another look at an adventuring treasure hunter.  Arcanum, another fantasy/steampunk mix.

Real Life
The Antikythera Mechanism, a lost relic from our own world.
The Fawcett Idol, which inspired an ill-fated expedition to Atlantis, deep in the Brazilian rainforest.
Immanuel Velikovsky's theories on the pyramids.  (Velikovsky is full of great gaming weirdness.)
The Voynich Manuscript, a riddle not yet solved.
Posted by drnuncheon at 18:00