Wilderness Travel, or, What I Learned on My Vacation


M and I (and faithful hound Argos) have returned from our visit to Blackwater Falls State Park in West Virginia, a trip that provided some much-needed decompression and relaxation—and an enforced vacation from the internet.  On the other hand, it provided some spectacular vistas and some thoughts about wilderness adventures, too… 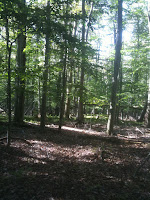 There's a couple of dozen trails through the park, of which the three of us hiked maybe a quarter of, and the one thing that struck us was that each trail felt very different—and these are trails within a couple of miles of each other.  The vegetation, the surrounding terrain, and even the state of the trail varied between all of them.

We're used to seeing flat, open forest in movies and on TV because they're easy to get to and film in, but sometimes the terrain isn't so friendly.  As I headed down some of the trails (and looked down into the canyon) I wondered about how one would navigate through this kind of terrain with armor, weapons, bulging packs and a mule.  I've come to the conclusion that travel time guidelines in games are a lot more generous than many gamers think.

If your players are travelling on a trail, some things to think about: who made it? Why?  How much traffic does it see?  A forest trail made by elves might be mistaken for a deer run, while one made by centaurs would be wide and cleared high enough for one of their kind (or a human on horseback).  Well-travelled trails will merit some sort of improvements over the worst parts, while disused ones may verge on the impassable.

Search for the unique.  There's no wilderness equivalent of the DMG's Appendix I (Dungeon Dressing), but there should be.  Is that rock natural, or is it the weathered remains of an idol to some sort of squatting lizard-god?

Maps can be deceiving.

When your players find a map, how good is it?  Who made it, and who did they make it for?  Did they have time to carefully survey the terrain to make it accurate, or is it a quick drawing made more to remind them of the path than it is to lead you and your companions?  What's on the map in terms of landmarks and natural features?  Maybe more importantly, what's not on the map that might be important to someone travelling across the terrain?  How old is the map, and what's changed since it was made?  Something as simple as the hexes to the right might look more like this in reality: 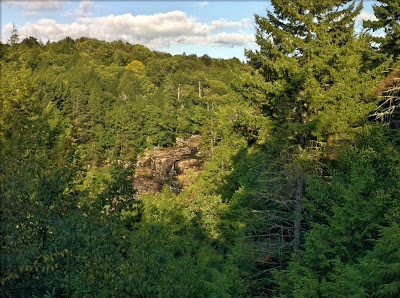 Visibility is not always a given.

If you live anywhere near civilization, chances are you don't experience actual darkness on a regular basis.  Between the streetlight outside and the LED alarm clock I'm not sure our house ever gets much past twilight.  I was reminded of this when we turned out the lights in our cabin and experienced actual darkness for what might be the first time in years.  You can talk about letting your eyes adjust for night vision, but if the weather is overcast or you're deep in the woods, even a full moon is not going to help you.  (The same apples to dungeons and caverns, of course, but one expects that underground.)

Even during broad daylight, visibility can sometimes be measured only in feet, depending on the terrain and vegetation—something to consider as your players make their way through a thick forest!


There's more, but it's going to take a bit of research, so stay tuned for Part II!
Posted by drnuncheon at 19:17

Email ThisBlogThis!Share to TwitterShare to FacebookShare to Pinterest
Labels: art of DMing, DnD