It's the weekend, and that means I owe you guys some reviews.  I'll be taking a break from the free stuff provided via RPGNow to look at two books I actually shelled out my hard-earned cash for. 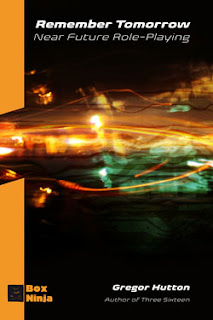 The first book is called Remember Tomorrow, from Gregor Hutton (author of Best Friends and the award-winning 3:16), and if there's any justice it's going to get even more awards than his previous work.  Remember Tomorrow is a cyberpunk game—but understand that when I say that, I'm not talking about the vaguely-cyberpunk-flavored gun-fetish action-movie stuff that we got with Cyberpunk 2020 and Shadowrun.  I'm talking about a game that plays like a Gibson novel reads.  This is the best game for playing something like science fiction literature since Shock:.

Remember Tomorrow is a "zero-prep" game, which makes it great for days where you're missing a person or had something come up that stole your precious planning time.  Like Shock: (and many other "indie" games), it dispenses with the idea of a central GM, rotating the responsibility around the group on a scene-by-scene basis—but unlike many other games with a similar structure, it doesn't assign a specific GM/player relationship, which was an interesting twist that I don't recall seeing before.

Play is fast and the rules are simple: each player takes a turn as Controller during which they can do one of three things: introduce a new character or faction, have their own personal character make a deal with a faction (increasing the faction's power but giving the character a chance to improve), or have a face-off.  Face-offs are where the meat of the game is.  They're the scenes where a PC can actually try to achieve their Goal—and where you try your best to stop them. The game encourages playing hard when you're in the Controller seat, because any conflicts you win there give you a bonus when you're trying to achieve your own character's goals.

Resolution centers around three stats (Ready, Willing, and Able) and a variety of positive and negative conditions.  Unlike more traditional games, your character sheet doesn't reflect a laundry list of skills, cybernetics, and equipment.  Instead, it's more like a map of your character's situation at any point in the game: he's Willing to achieve his goal but not yet Ready.  She's Dangerous because she knows too much, but Hunted by the lover she betrayed.  There's not a single game-mechanical item on the sheet that can't potentially change during the course of the session.

We've played two sessions of the game.  Neither one had time to come to the end of the episode, but the mechanics were solid, fast, and easily explained.  I'm definitely looking forward to playing this again, and I wholeheartedly recommend it to anyone who's looking for a cyberpunk game that isn't all Chromebooks and Street Samurai Catalogs. 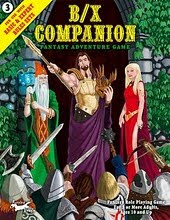 We move now from the cutting edge of new school RPG design to the mysterious depths of the Old School.  The very first RPG I ever played was the red book Basic D&D with the Erol Otus cover, and it is not an exaggeration to say that it started me on the course that shaped the entire course of my life.  I have met most of my closest friends—including my wife!—because of this hobby, and that boxed set started it all.

JB's B/X Companion (for sale at his excellent old school blog, B/X Blackrazor) is a love letter to that game.  Every single thing about it, from the artwork on the front cover to the layout and organization, is carefully modeled on the 1981 edition that I half expected it to come drilled with holes for a three-ring binder. Even the contents are modeled on the planned Companion set that was hinted at in the Expert rules but never actually produced.

Now,  I don't have any problems with the later editions of this flavor of D&D—the two-book Basic/Expert/Companion/Master/Immortals sets.  The compiled hardback Rules Cyclopedia is (along with the 1e DMG) one of the few D&D books that has survived multiple ruthless purges of my gaming collection, and I'm actually running a game with it.  But the Companion is an incredible piece of work, and if I didn't have the Cyclopedia I would think of it as a worthy replacement.

The B/X Companion picks up where the Expert set left off, detailing levels 15-36 for human classes (and extended fighting ability for demihumans) with all that entails: additional spells; new magic items; new foes to fight; rules for strongholds, mass combat, and domains.  Some of the new material will seem familiar to players of AD&D (recast into the B/X mold of course) while others are completely original.

Some of the things that really stood out for me as I read this book: thieves get new theif skills to reflect their expanding abilities: Create Device (the other side of Find/Remove Trap), Physical Prowess (acrobatics and the like), and Deception.  High-level spells seem appropriately powerful, like the 7th level cleric spell Bring the Dawn (and its reversal, Swallow the Sun) or the magic-user's 9th level spell Death Curse.

Combat presents some interesting variants, including one where damage is determined by character class rather than strictly by weapon.  Mass Combat seems quick and simple.  I'll be looking at the rules in the Companion as a possibility if I don't want to work out the full War Machine statistics for a scenario. The rules give bonuses for high mental stats, allowing intelligent commanders to inflict more damage and wise ones to reduce casualties, while charisma directly affects morale.  I would have liked to have seen class taken into account somehow as well—a fighter should be a more effective combat leader than a thief or a wizard.

The biggest problem I have with the combat chapter is unarmed combat. Grappling rules have always been a weak point of D&D, and the ones in the Companion are no exception.  They have the virtue of being fast and simple, but they fail to take into account strength differences between the combatants.  (Interestingly, they do take armor into account: a target's heavy armor gives a bonus to the grappler!)

The monsters chapter looks at literature and mythology as well as other editions of the game: Black Orcs make an appearance along with Carrol's Jabberwock, Bandersnatch, and Jubjub Bird, while the interpretations of vargulf and dokkalfar are almost certainly inspired by Elizabeth Boyer's underrated Norse fantasies.  The book includes some truly epic opponents like the Bane Lord (a terrifying take on the Balrog which can shatter your armor, melt your weapons, and set you on fire) and the Ruinous Powers (world-shaking monsters like Leviathan and Jormungandr, the Midgard Serpent).

The book finishes up with some solid DM advice, an optional class (the bard), a simple but functional set of guidelines for running dominions, and notes on adventures (including other planes.)

All told: if you enjoy classic '81 era B/X D&D, get this book.  If you like the '83 version or the Rules Cyclopedia, you don't need it but it's still got material worth looking at, especially if you're looking for something lighter.  I know I'll be plundering from it for my own games.  The author seemed surprised at the level of interest his book got, but if his future releases keep up this level of quality and love for the game, I think he's going to build a very loyal fanbase.

JB, I just have one question: shouldn't this have come in a box with a module and some dice?  Maybe the reprint…
Posted by drnuncheon at 11:06